The money is going to contribute to the building of the house that got destroyed in this year's windstorm, which also killed the family's father and left the mother and children homeless. (See news updates on our homepage)

I painted all 7 foxes in water color and assembled them so it looks like they are interacting with the company's products. 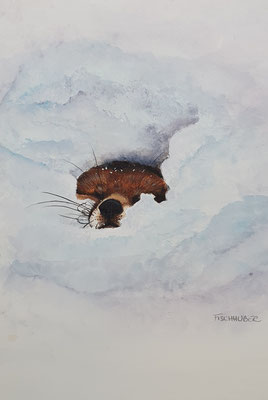 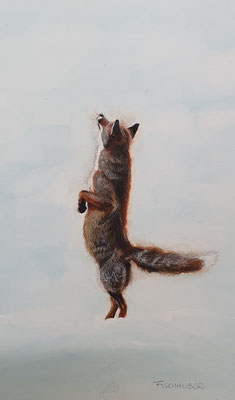 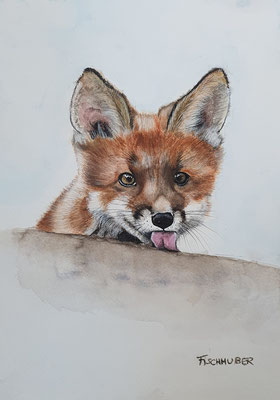 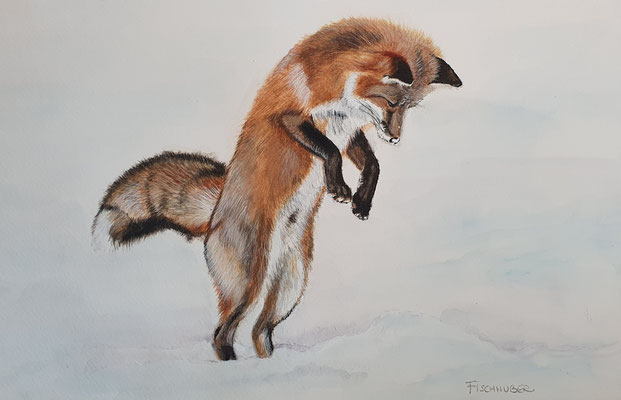 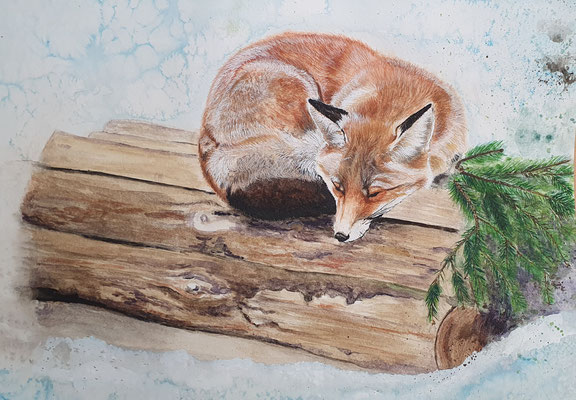 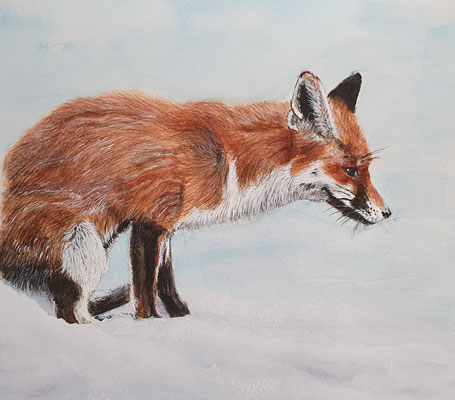 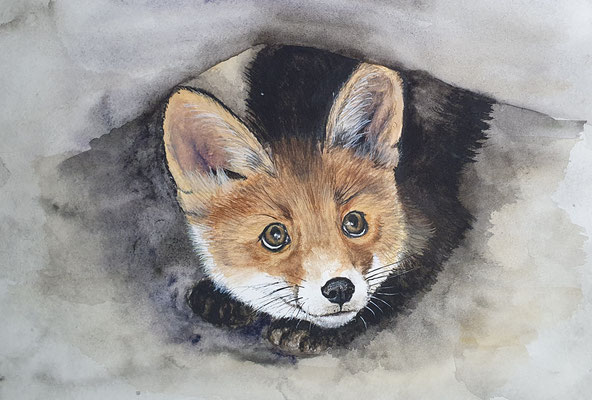 Our volunteers are working in their spare time, so mainly on weekends.
This is how we are able to save costs for workers and the donations can go exclusively into purchasing of materials.
We are very grateful for everyone's support.

Video of how the actual construction started.

Part of the walls have been erected already.
The house is going to have 3 rooms.
Don't let the construction technique confuse you. There is a foundation beneath the walls, made of reinforcing bars and concrete. The concrete floor will be added later on.

Rainy season is finally over.
We had some more sand delivered for the construction of the foundation.
Currently things are a bit slow due to the lack of volunteers helping to rebuild. We hope to find more workers asap.

After 4 months, our container has finally arrived in The Gambia and we were able to clear it from the port and transport everything to our storage, until we're there in person and able to distribute everything to the families needing them badly. Only certain items will be distributed earlier by our local contacts/members at our disposition.
Nothing seems to be missing or damaged, only the packaging suffered a bit. But we'll see once we arrive in The Gambia next time. Unfortunately, (due to the new government and its regulations) we had to pay customs and transport this time, so I hope to sell many Christmas cards this year to cover the costs.

Due to the almost permanently bad weather (rainy season), it is not  easy to make progress on the construction site.

The Gambia was hit by another storm last Friday around 11.30 p.m.

A woman in the neighborhood was hit in the face by a flying debris (allegedly an iron gate) and got killed.

The storm also destroyed the maternity ward of Fass Njaga Choi. It had been built by the VDC and a charity called HELPING CHARITY.

At the time of the storm, there were 2 women in the station. One birth went smoothly and the mother and child could be discharged, but the other had to be relocated because the roof was leaking heavily. Rainwater poured from a the cardboard ceiling panels onto the beds and the entire floor of the ward.

The ward serves the catchment of 19 neighboring villages, so the roof has to be repaired asap - just like so many other buildings.

The neighbor who took the widow and her children in now also has (partly) no roof - see photos.

Some good news at the end: Another neighbor donated 5 bags of cement to the family to help rebuilding their house.

Due to heavy rainfall partly with local flooding, it is not possible to work continuously.

Bricks are currently still being produced by hand. 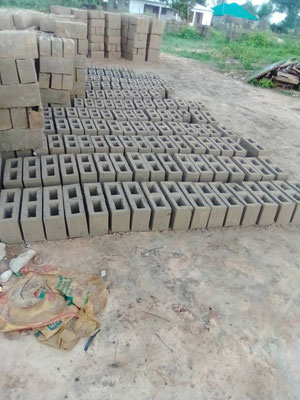 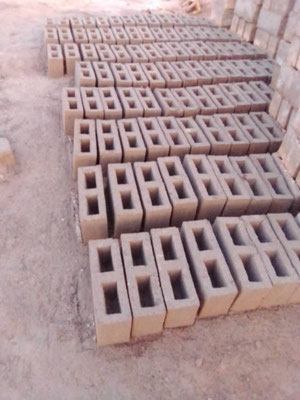 Due to heavy rainfall partly with local flooding, it is not possible to work continuously.

Bricks are currently still being produced by hand.

Here are two photos from Sunday.

Our container is already on a container ship near the coast of West Africa, after being reloaded in Las Palmas.

Let's hope, everything will go smoothly, as there have been reports of a broken loading crane at the port of Banjul.

With the first batch of sand and cement, some bricks were made by hand in a special mold. They now have to dry before they can be used for construction. In the meantime, the remains of the old house can be torn down and other necessary work can be started.

The on-site helpers worked for hours with great enthusiasm. 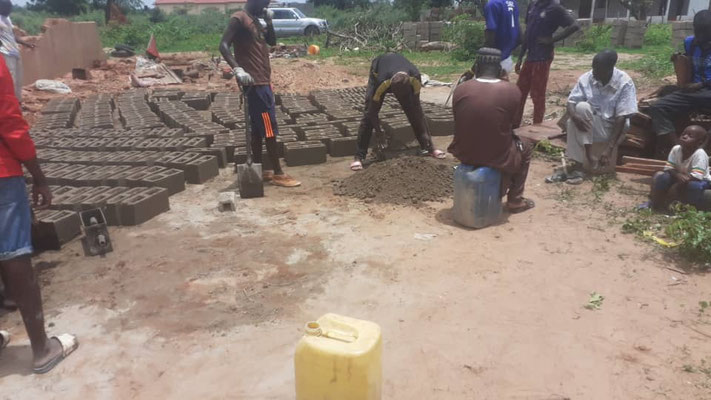 The first load of sand, steel and cement arrived yesterday. As we don't want anything to be stolen, everything (except for the sand) is stored with the neighbor.

There was an appeal to the neighborhood for as many people as possible to come and help with the construction work. Start of construction is planned for today.

We'll keep you in the loop.

This is the house of the family of a friend of ours. As you can see it got completely destroyed. They also lost their father that night. They are faced with ruin.

We talked to the widow, Fatou. D., and the neighbor, who took the homeless family in.

Her husband had saved the children first and was finally trying to leave the house with his wife. That's when the house collapsed. His legs were totally smashed by the rubble and his blood loss was too severe to save him. His wife also had a massive piece of the wall on her chest and couldn't move. Only the children were able to run to the neighbors and call for help. And as we've already told you, nobody had heard them.

Fatou's injuries got treated, but she also had a serious shock after the disaster.
Currently, they are staying with a neighbor, who told us, that he didn't know what to do. Nobody was helping so far and the family had nowhere to go. And this wasn't about to change in the near future, so they were stuck in their situation.

They were so mind-blown and relieved when we told them, that we'd help them rebuild the house by means of your donations.
The neighbor said, he'll organize people to work on the construction site. We'll send the material. This time the house will be built with cement bricks, since the mud houses are not solid and safe.

Also, there will be video/photo updates of the progress.

Meanwhile, I send you the sincere thanks from the widow, the children and the neighbor.

This is the house of the family of a friend of ours. As you can see it got completely destroyed. They also lost their father that night. They are faced with ruin.

“The North Bank [Region] was hard hit...We recorded a minimum of deaths [there] and at least one in the West Coast Region,” the agency’s executive director, Sanna Dahaba, told reporters. (Stats from Thursday morning, meanwhile there are more victims)

Our friend's family home was destroyed in the storm in the middle of the night. The father took his wife and children outside in an attempt to evacuate them, when a large part of the house fell on him. His wife and the children could not free him. So they ran to the neighboring houses, banging on the doors and calling for help. But since the storm was so loud and everyone inside sought shelter and hid, the neighbors believed that the noise was the storm. The family spent the whole night crying and unprotected next to the injured father. It wasn't until the next morning that the neighbors found them and called for help. The father was transported to one of the main clinics in the capital Banjul because of the seriousness of his injuries.

Tragically, our friend's father, who was buried by rubble from his house on the night of the storm, could not be rescued in the hospital and died from his injuries.

We want to help the family.

Perhaps there are a few among you who would like to support?

Thank you very much to

Mr. Fritz Bugkel/ Bugkel GmbH  for donating a lot of nontoxic wall paint, mixing colors, a pallet truck, pots, dishes, cutlery, a toaster etc. And for transporting all the donations including the sewing machines and bike to our storage.
Your support is highly appreciated! 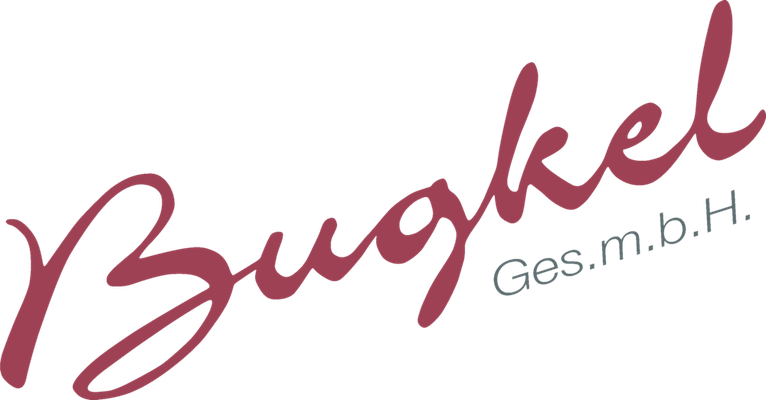 
Thank you very much!

Please keep collecting, the donations are going to make many children happy!

Austrian donors: Please feel free to send your collected items directly to us (not via Germany). Do not hesitate to contact us.
We are mainly collecting colored crayons, pencils, sharpeners, erasers, ruler, pencil cases, schoolbags.

Please do not send ballpoint pens, felt tip pens and other pens that are either empty quickly or dry out easily. We don't want to litter and there is no proper waste management in The Gambia. Thanks

Donation to a young widow and her children

In cooperation with Goal for the Gambia, we were able to support a young widow and her children with 50 kg of rice.

A neighbor of one of Goal for the Gambia's caseworkers recently passed away very suddenly and unexpectedly, "... a relatively young Mam with a young family who are left devastated and fearful of the future without him.

It was inappropriate to take a photo as she was extremely tearful but very grateful.  She is at a complete loss to know how she will manage after the sudden death of her husband and receiving this rice made her a little more at ease knowing she could feed her family.   The case worker who knows her is keeping an eye on her and trying himself , along with other neighbours to get her through these very dark times. "

Thank you very much for the donation, Helga Metzler!

There is always a way to support charities. Since the donations we receive are very little and earmarked, I decided to paint a picture for the Gambia Horse and Donkey Trust in order to support their projects. It can eg. be used for Christmas cards, be printed, auctioned... to raise money. 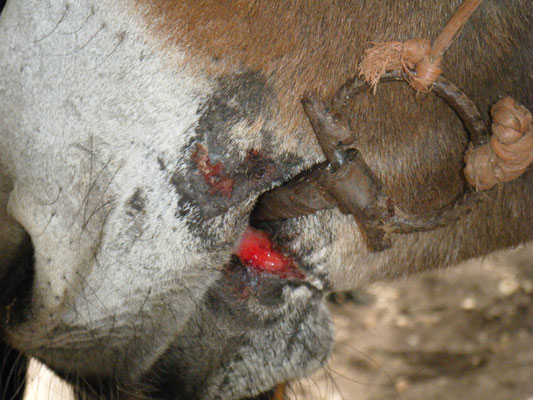 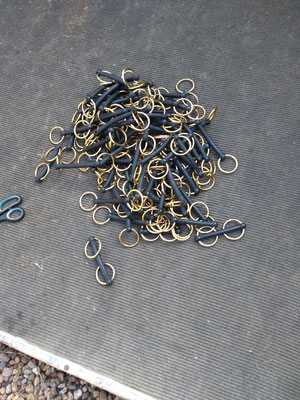 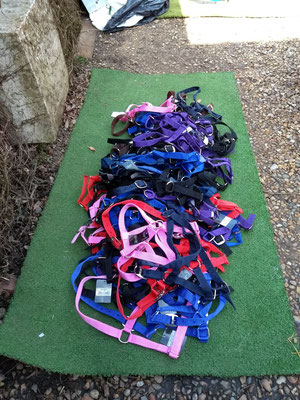 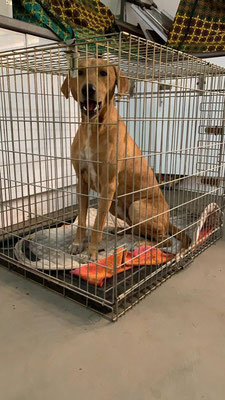 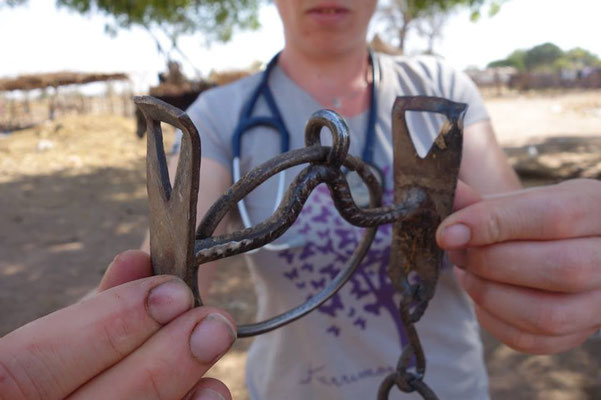 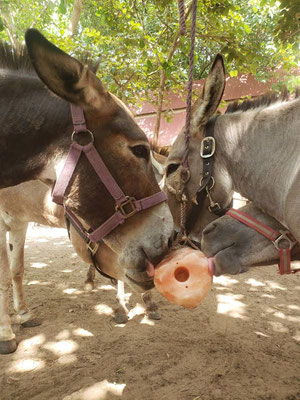 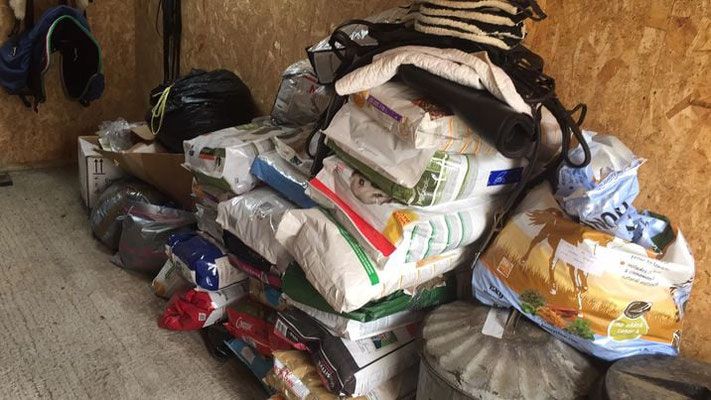 Thank you very much to

DI Pia Anna Buxbaum for donating 2 industrial sewing machines including matching tables. One can be powered alternatively through a motor or a foot pedal, the other one with a pedal. They are ideal for areas without (reliable) power supply. These sewing machines can possibly generate at least 2 incomes and therefore provide for 2 families. The child's bicyle is ideal for eg. riding to school (there are no school busses). 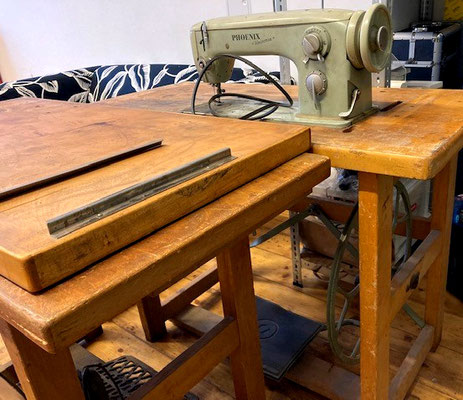 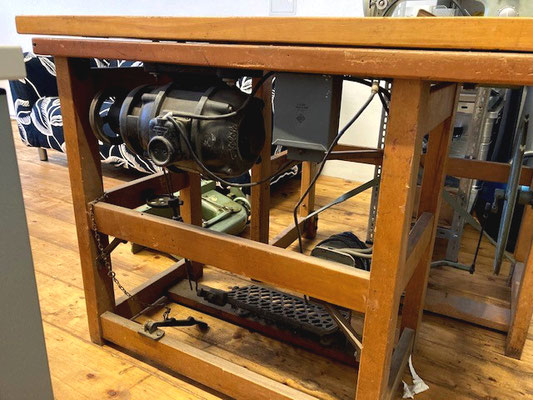 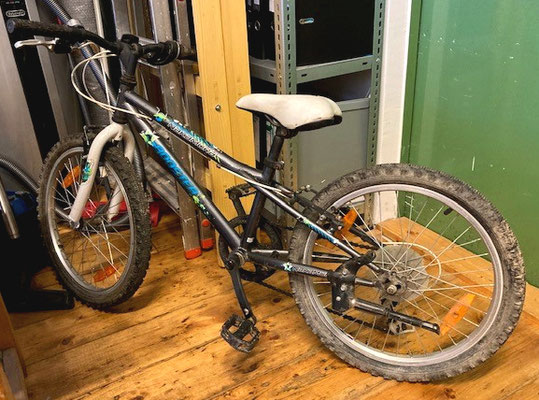 Thank you very much for a small TV, a cell phone for seniors and headphones. We will likely give both to either an elderly or handicapped person.

GAMBIAid is now registered at smile.amazon.de
You can support us while shopping on Amazon.de without even spending extra money.